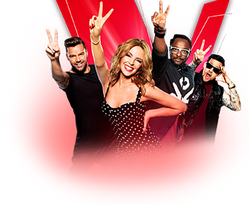 Season 3 of the Voice Australia first aired on the 4 May 2014. The Season was announced on 26 November 2013 saying that The Voice UK coaches Will.i.am and Kylie Minogue would be replacing Seal and Goodrem and join Joel Madden and Ricky Martin for the third series.

Blind Auditions started airing on the May 4th 2014 and were opened with a performance of "Hall of Fame" by the coaches.

Retrieved from "https://thevoiceaustralia.fandom.com/wiki/Season_3?oldid=4764"
Community content is available under CC-BY-SA unless otherwise noted.